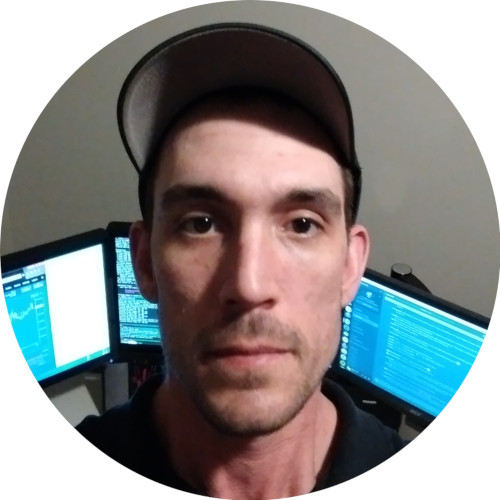 Having little formal education, most if not all of my education is acquired through various internet and hardcopy resources. I learn because I love.

I have experience, both professionally and personally with many languages in the GIS/AVL space as well as business apps (ERP, CRM). Jack of all trades, master of none doesn't sound cool but has it's advantages!

Primarily a vanilla programmer, I use and have used many frameworks and libraries but don't consider myself an expert with any.

Considered a grey hat hacker, I especially enjoy data mining. I can also be found wasting time with challenges or trying to make things do other things for my own personal enjoyment.

Ok, not really but it could have been worse! Discovered bug allowing anyone to steal any parcel of LAND including Roads, Genesis, or District LAND. Pull request by internal team fixing the issue.

Growing up in a family of business owners and entreprenuers I have always had a strong interest in business.

My business adventure began with danielkelly.me which was later rebranded to InterApp'ed™ for obvious reasons.

My first programming contract: A crucial part of growing a team of 3 to over 12 in just 3 years. I learned a lot about fast growing startups and what not to do. I also had the opportunity to invent a now patented GPS compression algorithm for moving coordinates (US, Canada).

I can now be found working on NonFungible.com, scraping data, hacking amatuers, and shitposting about unethical behaviour in the crypto-community.

Web design & hosting is what kicked off this adventure. I had an old school Linux user/hacker as a mentor to help whenever I was stuck. I now run Linux exclusively on servers, in my home, and in many family members' homes.

I try to host everything of my own on my own and be as self-reliant as possible. Web, email, DNS, file servers, VPN, whatever it is, I always try to get my hands dirty and further my understanding of different technology.

To name a few I have the most experience with: Apache2, nginx, MySQL, MongoDB, ElasticSearch, Bind9, Postfix, Dovecot, Sendmail, OpenVPN

I became interested in Bitcoin in the months leading up to the MtGox hack. I had invested several thousand dollars in Bitcoin mining hardware but I missed the real value behind Bitcoin, I simply thought of it as an investment opportunity.

Fast forward a couple years down the road and Bitcoin is raising fear from traditional financial instutions, "alt-coin" ICO's are now hype, the whole landscape has changed dramatically. Bitcoin is set to replace fiat for it's properties are desirable by everyone - decentralized, permissionless, censorship-resistent, global, open and free.

Bitcoin & other crypto currencies are the way of the future. Whether as a fiat replacement or as the decentralized, trustless backbone for many creative ideas.

Appeared on Fox News, BBC World News, and across many major media outlets explaining the utility and value of NFT

Please do not contact me directly for matters relating to NonFungible.com. Please use the contact form here